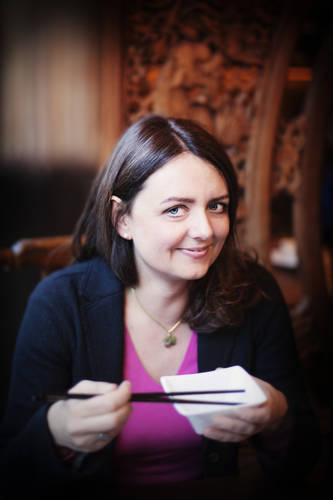 Dunlop has followed her passion for food and writing to become a popular cookbook author and Chinese food phenomenon.

Her award-winning cookbooks include Land of Fish and Rice: Recipes from the Culinary Heart of China (a collection of recipes from the Jiangnan or Lower Yangtze Region in eastern China) and Every Grain of Rice: Simple Chinese Home Cooking. Shark’s Fin and Sichuan Pepper: A Sweet-Sour Memoir of Eating in China is an account of her adventures in exploring Chinese food culture. In addition to four James Beard awards, she is a regular guest on radio and television, and has appeared on Anthony Bourdain’s Parts Unknown (2016). She is fluent in Mandarin Chinese, and she was the first Westerner to train as a chef at the Sichuan Institute of Higher Cuisine.  Spoke at Town Hall on 2/28/2018.

Watch a Video about Fuchsia Dunlop

"What a pleasant evening for me. I sincerely hope our paths cross again. " - Hugh Downs- Broadcast Journalist